A Lesson in Reconnecting 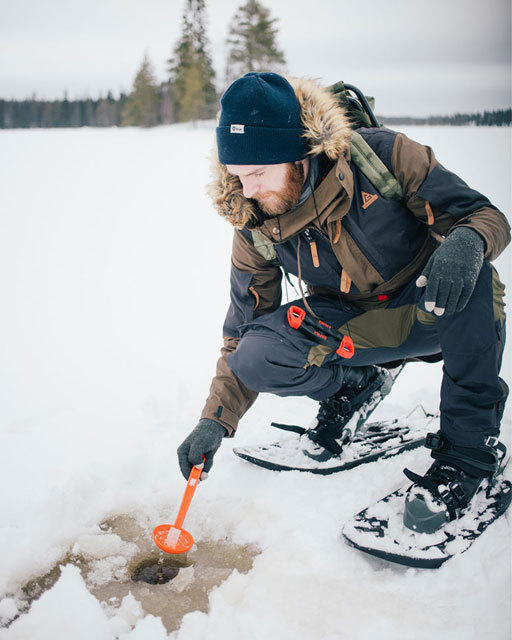 Reading time: 7 min. What happens when you take a person and put them in the middle of the Karelian wilderness? In the late winter of 2022, Padraig Croke participated in Karu Survival’s wilderness course, where he glimpsed into the wild – and got a bit closer to the mystery that is Finnish nature. Here, Padraig unpacks what he learned about the origins of the Finn’s remarkably close ties to nature – while, of course, including his notions of a certain Marttiini knife. 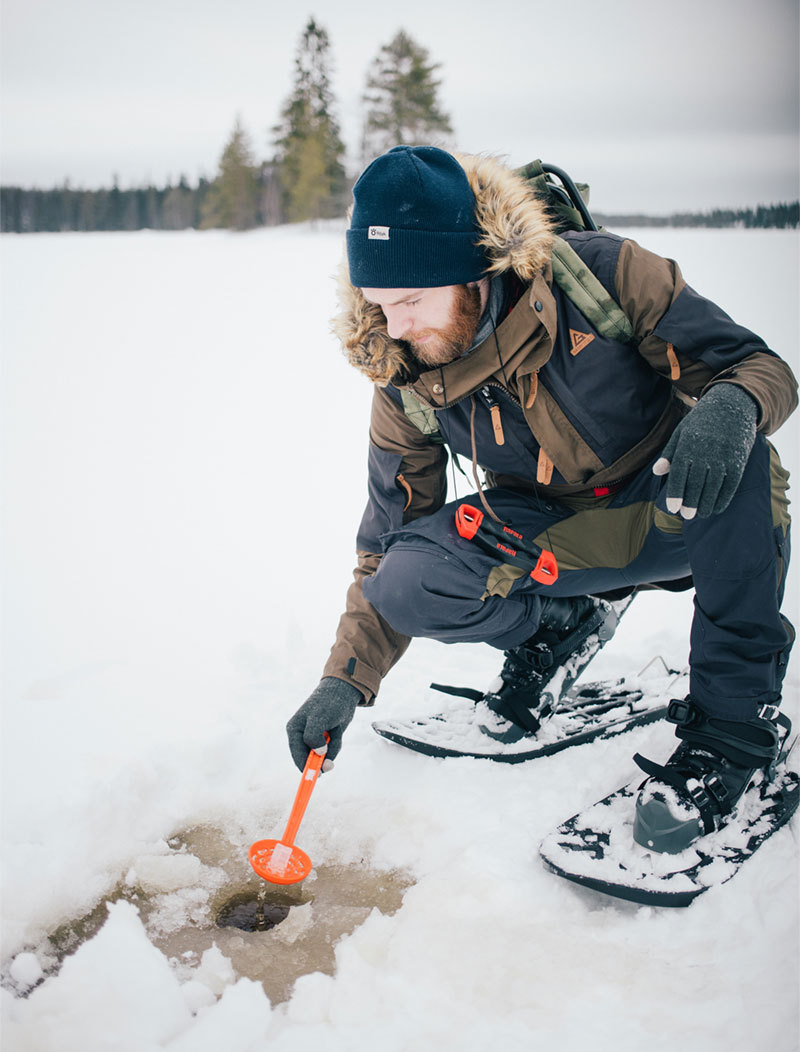 Yours truly inspecting the window in the ice. Ice fishing is an art of patience – but often, that patience is rewarded.

“The modern world has dulled our senses quite a bit. We don’t see in the dark like our ancestors did. Nor do we hear as well as they did because the information coming at us today is constant!”. I have just spent the last week with Mikko Kettunen at his outdoor school, Karu Survival, learning some of the skills that have kept people alive up here through the long cold months of winter for centuries. 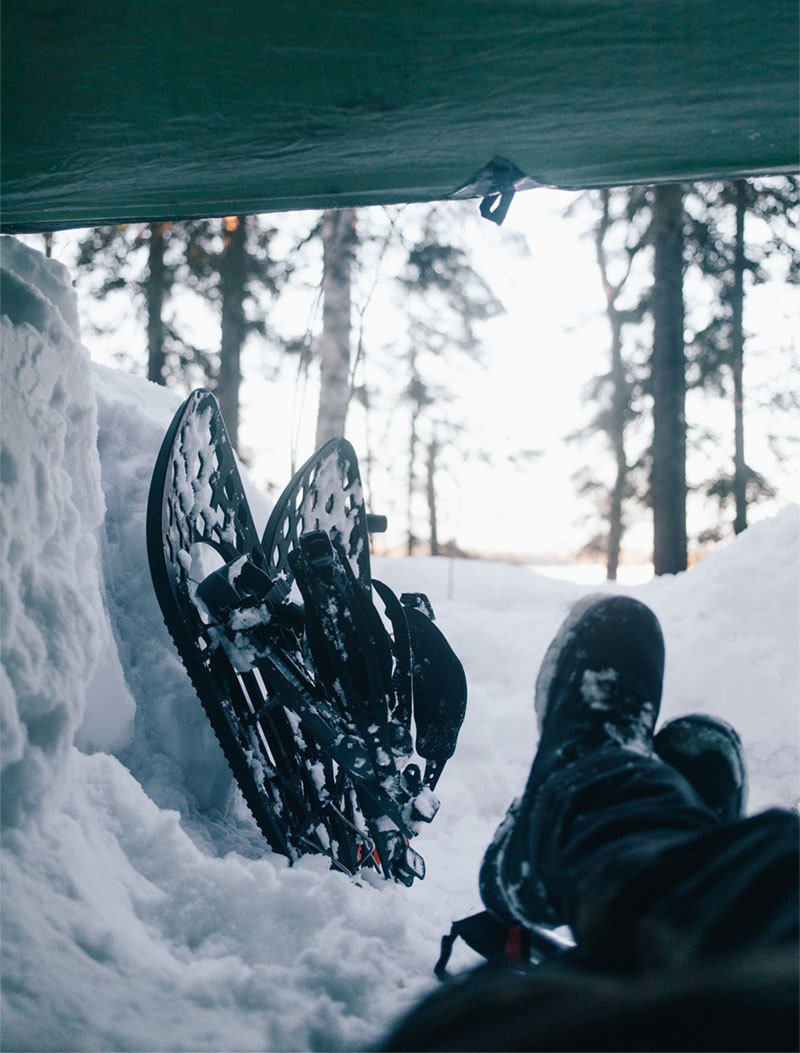 With the right equipment, the wintery wilderness welcomes its visitors.

We are sitting in the kota, a small circular hut with benches along the walls, a firepit in the centre, and two small windows on each side. It sits on the shoreside of the frozen lake that I’ve become familiar with over the last number of days, and on this crispy night, the stars are in their thousands above us. Bright hot flames crackle in the pit as the resinous pinewood spits protesting sparks in our direction. With just this firelight to see, we talk about reconnection.

“What I like to do is block my senses. I will go to the forest, block my eyesight and my hearing as best as I can. Then I use my senses from my feet and my hands and I start touching things. I feel with my feet on the ground and think…okay… pine needles. I will put my hands on the leaves and recognise blueberries, or lingonberries. This leaf is waxy… For me, this is about reactivating my senses. And it is fun also!” Mikko says. 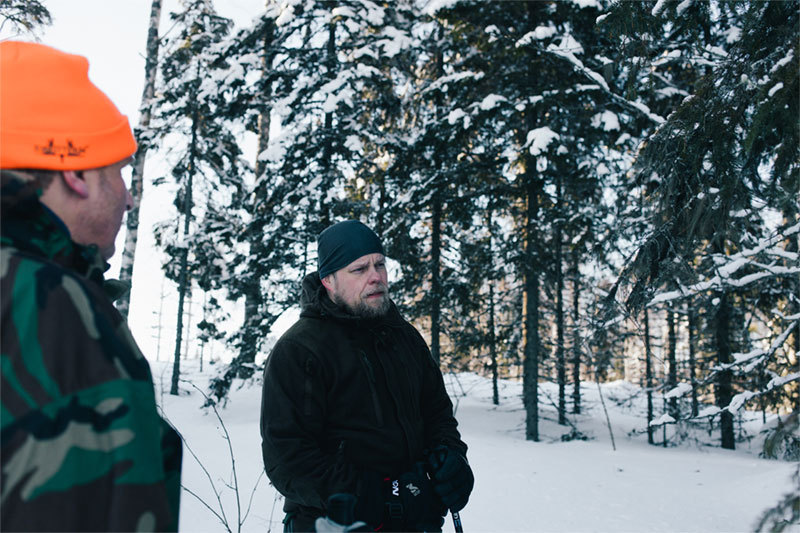 Mikko Kettunen teaches us to read the blank page of the forest. The marks reveal themselves to those who pay attention.

They call Finland the land of a thousand lakes. 10 % of this country is covered by water… making it over 180,000 lakes, in fact! Not to mention the miles upon miles of forests and woodlands. There is something in the air here that seems to draw people into nature without making too much of a fuss about it.

What I, or perhaps someone from my part of the world, calls bushcraft, a relatively new term to me, the Finns would simply call camping! ​

They seem to have it in their bones, and most people I have spoken to have spent at least one summer of their childhood in wild places, with just a wood-fueled sauna or a lake to bathe in for the whole season. Summers spent with their grandparents or extended family that seemed to last forever. But it is getting rarer, it seems.

We talk about this while sitting in the kota: “People are isolating themselves from nature today. It’s like some scary mysterious place that we need to protect, but it’s also kept away from us. We’re admiring it from a distance and don’t consider ourselves part of it… which we are”. 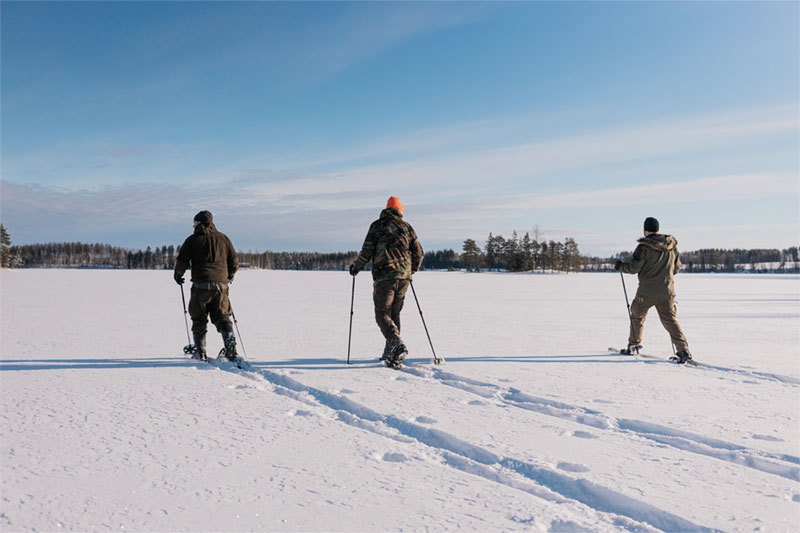 One of the best pieces of advice I’ve ever been given, when it comes to undertaking adventures, is ‘learn from the locals’. Whether it’s the best spots on the river to fish, the safest path up a mountain, or even the best restaurants to eat at in town, local knowledge is priceless! Mikko's understanding of the natural environment and his outdoors skills come from both his own career in the Finnish Military, and from his life as a student of his surroundings; the wilderness of Karelia where we now are.

By the third day of our adventure, we have all become well acquainted, and the ‘local knowledge’ is filling my head as quickly as I can get it down on paper. A fluid combination of classroom-type lectures on fishing and fire skills, as well as practical classes involving pulkkas and traveling across the land. 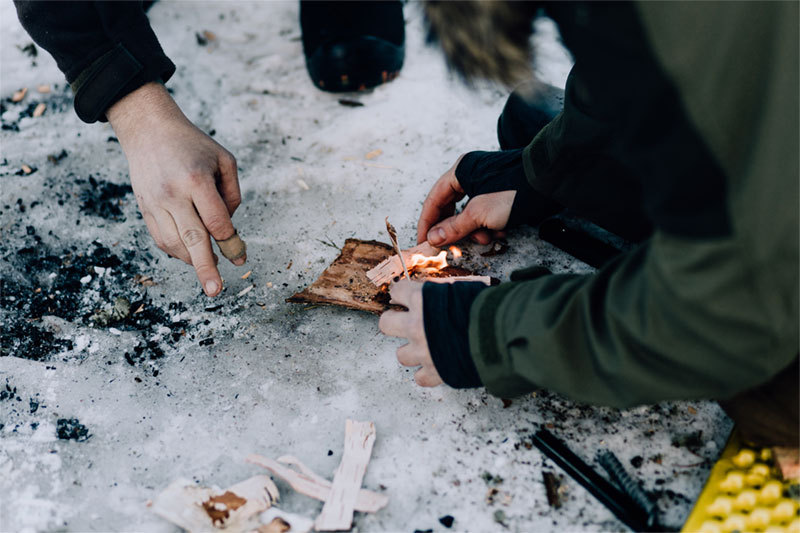 With a source of heat, the wilderness becomes hospitable.

There is a sense of teamwork and camaraderie building between myself and the two guys taking part in this course with me. There's an English guy about my age and a 192 cm tall Dutchman we have affectionately nicknamed Cruise Control – because he always gets the job done, it’s just done according to his own schedule. I think he likes his new nickname.

We have been digging shelters with shovels and my wrists are throbbing from the impact against the icy snow. It reminds me of when I used to box a heavy bag and I think to myself that hand wraps would be useful. We are working for our food here, and my body and mind are energised by it. I get my first taste of forest skiing, which I’m not very good at, but I still enjoy it immensely.

Using these skis, we navigate the woodlands around the cabin as Mikko points out to us the most subtle of signs that I would not have noticed before. Here, the footprints of a mouse, there, a sign of squirrels feeding. When you start to train your senses, the snow becomes like the white page of a book, the animals using it to write their stories.

Some day I hope to be as literate in the forest as this, but I know this will take many more years. This is the connection I have come here to learn. 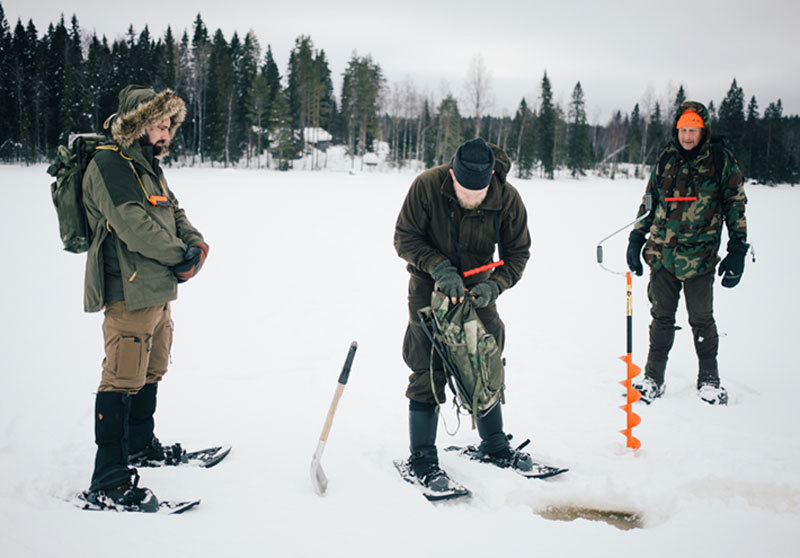 Who’s up for ice swimming? No one?

If there was one object I would use as a symbol of this national connection to nature, it would, without a doubt, be the puukko knife. A practical, simple tool that allows the user to make use of the resources that nature offers. To be part of its system and to respect what it can provide. The puukko's handle and sheath are often made from these natural resources; birchwood, animal bone, leather, and antler.

In Finland, receiving a puukko as a gift is considered an honour, the idea being that the presenter is giving the recipient a tool essential for both woodworking and preparing food, and that the presenter holds the well-being of the recipient in high value. Almost everyone here remembers their first knife, and usually, it's their father’s (or grandfather's) old Marttiini fishing knife.

Mikko tells me about his first knife:

“When I was about five years old, I told my dad that I wanted to have my own knife, because every boy had to have their own knife. My dad replied “Ok, come here” and he went and got his old fishing knife. Ugly as hell! But sharp as hell also. He handed it over and my knife training lasted about ten minutes. He said “never use the knife between your legs. Always keep it in the sheath when you’re not using it. Never run with it. And when you cut yourself come to me and I’ll put a plaster on it”. And then he left me at the side of the house with a pile of firewood, and so I took a piece of wood and started carving.”

If you want the best, use what the locals use, it seems! 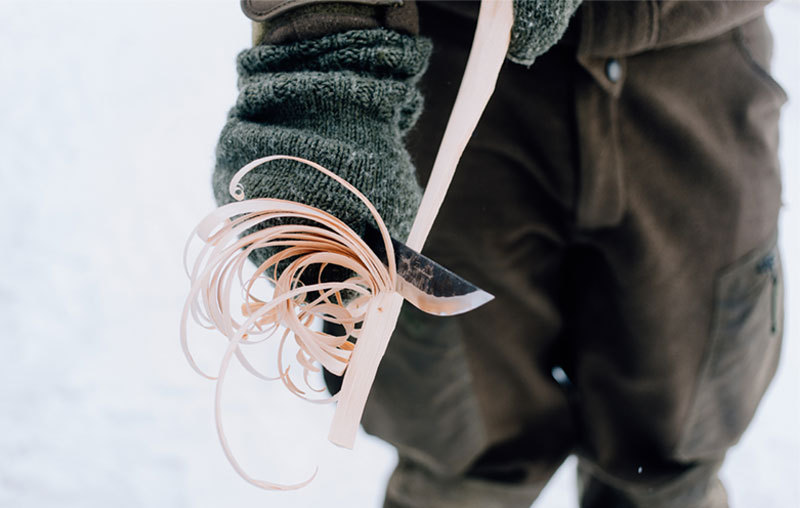 Mikko puts Aapa to the test. In expert hands, the wood is quickly transformed into feather sticks.

So, when coming on this course, I opted to bring my Marttiini Aapa knife with me to see how it fares in the country it was built in. I hand it to Mikko during our firemaking lessons to see what he thinks. Standing in place, he quickly gets a feel for it before expertly placing it onto the sliver of wood he's currently holding and begins to make fine feathers along one of the edges. “Oh, this is very nice…”. The knife acts like it’s been in his hand forever and we discuss some of the features he looks for in a knife. “I like how deep it sits in the sheath, this will not fall out in the woods!”.

I mention that I also like the swell on the butt end of the handle, especially when I’m wearing gloves, and he agrees with me. And so, with a thumbs up from a local, I happily return my puukko to its sheath, where it lies ready to take on whatever that's in store for me during my stay at the survival camp. 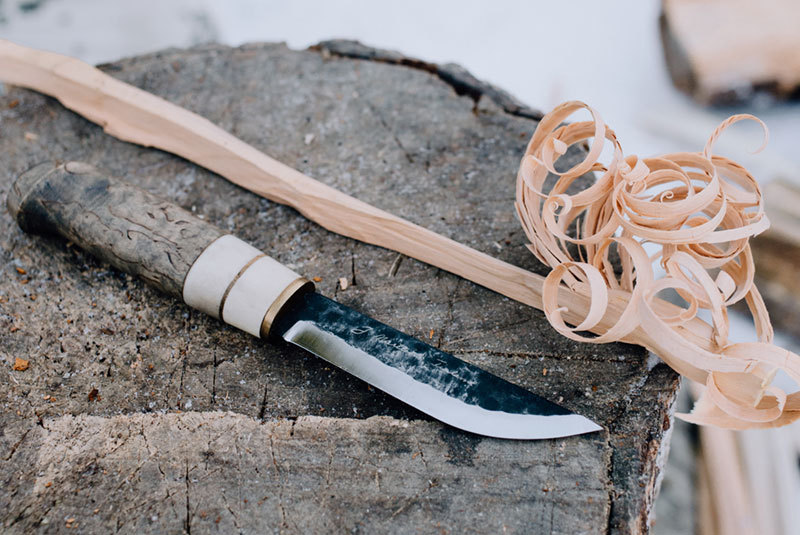 By the time I left for home, back up to Vaasa on the west coast, I felt both exhausted and invigorated, my mind full of new ideas and concepts. This country I now live in, its philosophy and it’s no-nonsense attitude towards the natural world are, I think, starting to make a little more sense to me.

But I would not pretend to have all the answers, and I know it will take me years to dig through just the topsoil of the complexities of the culture here. They say the Finnish language is one of the most difficult in the world to learn, not only for its technical complexity, but for its ability to describe things in such subtle and nuanced ways. They have, for example, forty (yes, forty different words!) to describe snow. 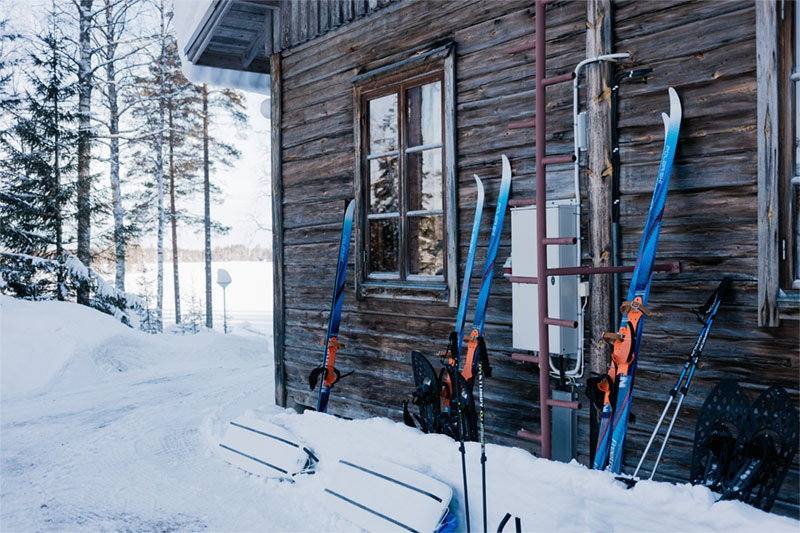 The Finnish people, just like their landscape, are comfortable under calm silences, but under that, there is a pride in being close to the soil and being a part of the natural world. It seems I still have a lot to learn. But who better to teach me, than the locals?